Sean Swaby interviews his 15 year old son about the experiences that make you a man.

Turning 18 is a piece of cake, becoming a man is a piece of history. As a father, I often wonder if I am doing enough to prepare my son for manhood. So I asked him and he agreed to the interview.

“What experiences are helping you to move from being a boy to being a man?” The question made my 15 year old stop talking for a minute. He likes to hear himself talk, so that was 60 seconds of well deserved peace.

At first, he hesitated. I know, it’s a big question. I think he wanted say the right answer but the right answer is not always the answer that you need. To me, this reveals the dilemma that all men face as we grow up: getting from what we should be to become who we are.

To ease him into the topic, I shared some of my own growing-up stories. I talked about what I learned from struggling in school, from growing up with an alcoholic-parent and from being shy for most of my young life.

The 7 Experiences that Turn a Boy into a Man

My son attributes a great deal of his growth to what happened during his Junior High School experience (Jr. High). In Canada, students in grades 1-6 attend Elementary, grades 7-9 attend Jr. High and grades 10-12 attend Senior High. This may be different than in your state or country, so I thought I would provide a little context. Context can be everything.

1. Make your decisions and live with them. In grade 6, my son made a choice to attend a Jr. High School where he had no existing friendships. At the time, he was having some conflicts with a few other boys and he decided that a new group of friends might give him a fresh start. He never anticipated that it would take two years to build friendships and become more accepted. In Jr. High, the hallways are like a Grid Iron, where a student’s emotions and their weaknesses are tossed around like footballs. Choosing to attend his Jr. High and stick with his choice meant something to my son. He wanted to show his mother and I that he made the right choice.

2. Going through pain and learning from your mistakes. My son was bullied, for no other reason than being innocent. In a world where innocence makes you a target, your most sensitive self is at risk. Other boys in his class were much more informed about sex, swearwords and substance use. My wife and I had shielded him and we were no longer able to do so. He frequently came home describing how other students made fun of him because he did not know about the latest sexualized term. He carried his pain silently and it made him question the beliefs he had been taught at home. “Being bullied can give you resilience, you know what you stand for and understand your own strengths.” Wise words.

3. Independence is the #1 thing. My son is 15 and like most his age he longs for more freedom. My wife and I are working on that one. We believe that freedom has to be earned, otherwise it can be devalued. He values his freedom because he is free from the watching eye of mom and dad. He says that when he is on his own, he makes his own choices and he has to live with them. And he believes that is the only way you can improve.

4. Being connected. Irony is a word that describes the teenage landscape. He longs for independence, but within an hour of being alone he is calling my wife or I asking when we are coming home. He is not afraid to hug us and desires continual reassurance of connection and love. Becoming a man is not about leaving your family behind, but “it is about knowing that someone has your back.” You may not like everything your parents say, but you need them to support you. 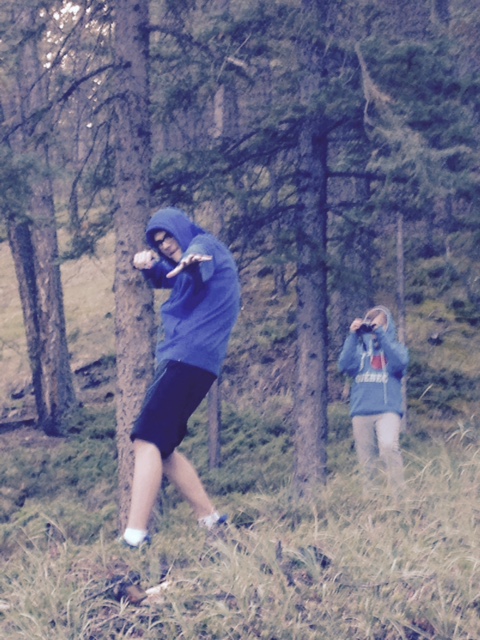 5. Find the boy inside the man. My son has taught me the importance of play and being silly. His brand of manhood is to embrace your inner silliness. He loves to laugh and that is part of his manly spirit. If being a man means that we need to become serious, I think we lose something important.

6. Relationships are messy, like your bedroom. My son bugs his sister: ALL. OF. THE. TIME. They fight like they are married. They fight about who gets to sit beside me for supper, who gets the last can of pop, who knocked whose backpack on the floor, who has to wipe the dishes and whose turn it is to take out the garbage. The arguing drives my wife and I around the bend. When I step back from the emotions I can see that inside of their arguments, they are fighting about real life: relationships and closeness, sharing, respect for boundaries, taking turns, and negotiating how we live together. It is beyond frustrating to listen to the fights, but they need some freedom to fight for what is important. My son says that having a sister has taught him about what women think and how they are different than men. Messy bedrooms and messy relationships can create a lot of arguments, but this is often where we learn the most about ourselves.

7. Hang onto your trophies. Inside my son’s room is a collection of Lego, mystery books, a telescope and a wooden motorcycle made by his grandfather. He is ferocious about keeping these things. They are memories of when he was young. He says, “You don’t want to let go of your childhood too easily. I’m not ready to be a man yet.” The best kind of memories can serve as a type of root system that will allow us to stretch out. I have a collection of my own trinkets, because there is a boy inside every man.

When my son turned 13, I played him this song, “The Boy Inside The Man,” by Canadian Rock legend Tom Cochrane.

I leave you with this line that points to one of the greatest experiences that can teach a boy to become a man:

I have lost and I have won

Cause the boy will never die.

How about you? What stories or experiences are helping your son to make his own way into manhood? The Good Men Project is a place to have the conversation that no one else is having.

I have a weekly column at the Good Men Project. Becoming a Premium Member costs just a few dollars and it will allow you to get access to premium content such as eBooks, seminars and the pride of supporting authors, like me. Just click the link below for  your discount.

One thought on “What Makes a Man? An Interview with My 15 Year Old Son”