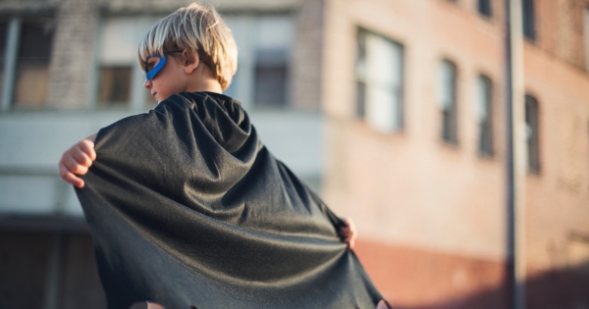 I confess, I am a Geek Dad, and I capitalize Geek Dad because I am proud of my title.

Just so we are clear, here is the definition: Geek Dads are interested in video games, comic books, superheroes, science fiction and other “geeky” things and we bring these into our parenting (and work, and romance, and just about anything we do). Geek Dads have a motto:

Geek Dads know that no matter how old we are or what we do for a living, we strive to be ourselves. For us, it means that we watch and randomly quote Star Wars, Star Trek, Harry Potter, Lord of the Rings, Bono, Steven Hawkings, Stan Lee, Spiderman, Batman… or pretty much any other fun and fictional characters that we like.

One of the best things about being a Geek Dad is that sometimes we get to act like kids. That’s why for this post, I refer to “Kids” – even if you have teenagers, young adults or children. For each of us, somewhere in our hearts we are all just a kid…

Being a Geek Dad brings the kid out of you and you become more engaged in being a dad. Playing video games, going to ComicCon, dressing up at Halloween or on a Saturday in July… these things are fun at any age. Having figurines at work, and talking about comics are ways you can be yourself and bring some of your interests to your ‘Everyday-Dad” life.

Maybe your kids don’t care about all the stuff that you know in your job-world, or how much you know about cars, or whether or not you can benchpress a fridge. But if you start talking about Harry Potter, the Wolverine, Black Panther or the Walking Dead, they perk up too.

2.When you embrace yourself as Geek Dad, it may help your kids relax a little too

You are not just ‘rule-giving dad’ but you can also let your hair down and be a human being too. You can be playful… even when you are embarrassing.

It shows kids that growing up is not about leaving behind all of the kid stuff. When I think about my childhood and teenage years, I loved action figures, movies and comic books. If I didn’t have some of that stuff today and tried to be adult and future oriented all of the time… I would also feel regret because I left behind some of the fun stuff. Growing up and leaving the fun behind sucks. Kids need examples of how to grow up, but still let loose sometimes.

3.You can use your sense of humor and go into ‘stealth-dad’ mode

This is where you relax things and step out of ‘lecture dad’ mode. Humor can defuse tension and kids can miss that even when you use humor, you are teaching something. That’s because Geek Dads are like Jedi and the Force flows through us. Sorry non-geek dads… we don’t mean to make you feel you don’t have it… but you just don’t.

Positive, non shaming humor can help to send a message that whatever issues they are facing are not permanent. Their concerns are important (as long as you are not laughing about what is important to your kids) but the conflict is not forever.

It does not matter which genre you choose, if you use any Geek-World (ie: genre of fictional stories, movies or content), it can bring out values and what is important to the characters. Talking to your kids about a character’s decisions, risks, challenges or values is way different and less threatening than talking to them about THEIR values or decisions. It is not a quick fix, but it can help your kids think about their lives and decisions from a different angle.

Stories stick with us way longer than lectures, lists of memorized facts, and other important life-lessons. We remember stories and as we age, we see characters differently. I see Batman way differently today than when I was 18. He used to be a crime-fighter with gadgets and an awesome car. As I have aged I still appreciate his super-tech but I also see his darkness and trauma. I see the conflicts that he has and how he takes himself to dark places because the city he cares about need him to do that. He is also super-rich but he leaves that behind… and sometimes I’m not sure I would do the same thing.

I don’t play video games, but my 18 year old son loves to play. So I asked him what he likes about his game so that I could know more. I even geeked out and took notes (taking notes helps my ADHD brain to focus). Talking with him helped understand that gaming is teaching him a few things, like critical thinking, perspective taking and problem solving. He taught me about something he called ‘field of view’ where he knows how to position himself so he can see the landscape and both protect himself and attack. He also learned how to anticipate where his ‘enemies’ will hide in the game zone. As an old guy, I know that these are huge skills in life: communicating what he is passionate about and ensuring that he does not lose his audience (me), letting people listen in their own way, being okay with attention and questions, perspective taking, problem solving, anticipating emotional triggers and weak spots. Right now, he hasn’t translated all of this into his own adult life. But I see signs that he is getting there. And he appreciates that I took the time to listen.

5.You show you are interested in what they think

My kids don’t always tell me everything they are thinking. I have learned that when they do start talking, it’s my job to shut up and listen. Some of our best conversations start indirectly. If your kids have a genre they like, ask them about the characters, the themes and plot. Be curious about the lives and challenges in the stories or games. When you show interest, you care.

One huge benefit about showing interest is that you may pick up stories they like. Using stories or metaphors that they are interested in is way more powerful than anything you could have dreamed of because it’s their story, not yours. They get to think for themselves, and you show that you are okay with that.

Related to this, if your youth has a ‘geek’ interest, paying attention to what they care about is a powerful way to communicate acceptance. Some youth are bullied for their interests in fiction, fantasy, or imaginative expression. Having a dad, or a parent, who takes an interest, even if we don’t completely understand it all, shows that we are there for our kids no matter what may happen.

6.When your kids struggle, geek themes help you see that there isn’t anything ‘wrong’ with them

Sometimes it is tempting to become caught up trying to be too logical or using big, psychological terms. These may help, but kids may get the message they are doing something wrong, or that there is something wrong with them. Using pop culture is like having a set of stories that communicate about real-life issues across generations, cultures, genders and interest groups.

Doc Ock: [grabs Spider-Man in the bank] You’re getting on my nerves.

Spider-Man: I have a knack for that.

Green Lantern’s movie sucked… but still, he is a great guy (he’s from Canada, by the way). Who hasn’t had a day, or a year that sucked? Movies like Green Lantern can teach us things… like go ahead and make your movie. If it sucks, wait 10 years and then remake it. Sounds like what some of us mature-dads do with own love and relationships, our careers, our businesses and our dad-bods…

7.Movies, books and culture can be like an anesthetic

As we grow up, hopefully, we learn from our mistakes. Sure, you could drink, or do drugs, eat your way to obesity, or gamble. Or you can watch movies, read comics or books. And using pop-culture as a way to cope or ‘chill out’ allows you to use different parts of your brain. At times, we all need to talk about how we are doing. But think about it, did you talk about all of your feelings when you were your kids age? Neither did I.

Instead of using psychology words for our experience, Geek Dads learn phrases that are way easier to understand. Words like “anxiety, depression, self-esteem” but they are way too clinical. Instead, try these:

9.Life may threaten to rip you apart. But you can recover

I can still remember what it was like to feel the hopeful electricity inside me when I graduated. I saw my whole life ahead of me and I believed that it could be incredible. Then I went to college and dropped out. I got a job and was almost fired. I had a girlfriend and then I broke up with my girlfriend. I had to figure out how to deal with my divorced, angry, alcoholic-dad. I was underestimated, ignored and eventually I concluded that life was just too hard…

Geek Dads use stories to remember how hard things were… and still are. When we are going through things, we can forget how hard we had to work to build skills, to feel confident, to know how to respond to stress and uncertainty. Heck, if we are honest, that stuff is always tough.

Jessica Jones is a superhero with superman (superwoman!) strength, she swears and she had a drinking problem. Even though she is super strong, she could not resist Kilgrave, a much weaker man, from sexually assaulting her. He did not lay a finger on her, but he used mind control to make her comply. When she finally escaped, her own thoughts tortured her, telling her that she chose to stay, that she wanted it. At first, her anger burns her up, but eventually she learns how to use her anger. She defeats Kilgrave but more powerfully, she reaches out to other Kilgrave victims and starts a support group.

10.Last, Geek Dads have a cool spiritual side

Some Geek Dads follow a spiritual path and others do not. I will share with you something I heard from someone I consider one of my Geek-Heroes, Jesus. He talked about Geek Dads and how he wishes everyone could be like us. He said, “Unless you change and become like a child, you will never enter the kingdom of heaven.” Wow. That’s cool.

For a related post, see “Carrie Fisher and Recovery: Learning to Embrace Your Dark Side” I invite you to sign up for my blog by clicking “Follow Getting High on Recovery.” When you enter your email, you will get free access to the blog. I do not send spam or share your email with anyone.

What I ask in return is that you comment on articles that connect with you and please share my work. And please take a moment to vote for my page on Psych Central’s list of mental health blogs.

In the new year, I will be offering Geek Therapy using popular culture and superheroes. My specialties include addiction and mental health recovery, parent-teen relationships, emotions and communication skill-building, family counseling, trauma support and spirituality in counseling. If you would like to experiment with Geek Therapy and how it can benefit you, contact me at smswaby@icloud.com.

2 thoughts on “10 Great Things About Being a Geek Dad”