If there’s one topic which appears regularly in the media at the moment, it’s mental health. It might be celebrities coming clean about their previous hidden mental health problems, or journalists and pressure groups highlighting the chronic under-funding of our health services over the last few years.

I often think… is this epidemic a by-product of modern western living?

Perhaps a result of economic wealth and the influence and interference of technology such as social media. Mental health issues seem less prevalent than say fifty years ago among previous generations. Are they even seen at all in the developing world?

Data reveals that mental health problems are definitely on the rise and here are some enlightening statistics:

1 in 6 have mental health issues

NHS Digital reveal that at any given time, one sixth of the UK population between the ages of six and sixty-four have a mental health problem

There are about six thousand suicides per year in the UK, the largest proportion of these people are male, accounting for three quarters of this figure. It is the biggest killer of men up to the age of forty-nine reveals the Office for National Statistics. They have control of the data gathered from the registrations of deaths in the UK.

Women are more commonly affected than men with one in five women reporting a mental health issue. That’s compared to one in eight among the male population. These figures come from NHS Digital and their Adult Psychiatric Morbidity Survey in 2014

The majority of mental health problems begin in childhood or early adulthood. Three quarters of problems are established by the age of twenty-four. Revealed by the Mental Health Taskforce in 2016.  Young people do seem to be particularly susceptible.

A whopping 23% of NHS activity is taken up with mental health issues but the corresponding funding is only 11%. (The Kings Fund 2015)

Medicine use is growing…

The number of medicines dispensed for mental health related conditions and illnesses such as depression and panic attacks, has more than doubled in the last ten years. This data comes from an NHS Prescription Survey over the decade 2006-2016. These statistics may be tempered somewhat by the growing evidence that anti-depressants are a more effective way to treat some of these conditions, therefore patients tend to be prescribed these drugs for a longer period of time.

How high concentration sports can help

The situation in the UK with regard to mental health is quite closely reflected in the US so apart from investing more money in diagnosis and treatment services, is there anything that individual people can do to help themselves?

As Prince Harry said quite recently, “everyone no matter who they are has physical health and mental health“.

Physical activity and sport has a huge part to play in promoting and sustaining good mental health but surely it is not as simple as saying, ‘go for a run, it will take your mind off things’?  Sport in general is very much in vogue at the moment, not just for the evident physical health benefits but for the well documented effect that physical activity can have on the mind.

This is because when we exercise, the brain releases certain chemicals which can help with mood and alleviate issues such as anxiety and depression, even if only for defined periods.  Also of course collective sport, where we engage with other people whether as a group or in a team, also promotes our mental health as it offers interaction with others, fundamental for a healthy mind and outlook.

If sport is beneficial therefore to the state of our mind, surely high concentration sports must be the best elixir for those struggling with mental health issues?

The four key mental factors in sport are considered to be:

The demand for concentration varies with the sport and is divided into three types:

Negative emotions such as anxiety, anger or depression can affect the ability to concentrate so is this not a chicken and egg scenario?

Learning techniques to concentrate intensely for short periods of time are fundamental to sporting success and can also have proven benefits for those who are struggling with mental health issues, ergo high concentration sports can be an excellent mechanism to help support mental health in a whole range of people. Whether it is supportive to existing conditions or to some degree preventative.

This is because the amount of focus required trains the brain to concentrate on the here and now, to ignore negative self-talk and doubt by utilizing positive self-talk. Employing strategies such as ‘parking’ techniques to temporarily remove unhelpful thoughts and emotions and put them to one side for a defined period of time.

From this, it is easy to understand why all these techniques used by successful athletes in high concentration sports, can have a positive effect on almost anyone.

Archery and other target sports

Archery as a target sport requires high levels of concentration and offers to the individual perhaps not such an obvious benefit and that is one of self-discovery and self-truth, in fact a road to mindfulness and inner peace.

Mindfulness is a heightened state of self-awareness, a way of slowing down the moment and focusing only on that point in time, developing deep levels of consciousness, of how the body feels rather than by being solely driven by the constant jumble of thoughts and emotions in our heads.  Becoming more aware of immediate physical sensations and our environment allows us to understand and process our mental traffic; it’s not about changing it but more the ability to disassociate ourselves from it and see it for what it is which is something that does not need to govern and define our lives.

The Japanese who have not picked up a bow in anger for centuries use archery, the ‘Way of the Bow’ or Kyudo as a mechanism to provide focus and self-discipline.  Kyudo has strong links with the teachings of both Shinto and Zen, providing a whole body and holistic experience of focus and concentration – whole body control means that the mind is also completely focused; Kyudo is sometimes referred to as ‘standing Zen’ because of the total immersion that is required in the technique.

Archery requires significant mental input from the archer but this high level of concentration also gives rise to and develops many other faculties and emotions and some amongst these include:

This can lead onto the following, positive lifestyle developments:

Other benefits may include:

Target archery is an all inclusive sport so can be enjoyed by children, older people and the less than physically able.  There is a level and involvement for everyone.   But don’t let me wax lyrical about how inclusive a sport archer is, meet Martin Douglas who suffers from Aspergers Syndrome and let him tell you how archery has helped him deal with this condition and how in fact, mild autism has made him a better archer.

Mel Clarke, originally from Norfolk and now living in Worcestershire, is just one example of how disability is no bar to participation in archery.  A former European Champion in 2002, Mel was the first disabled archer in Europe to make it onto the able bodied team a year later in 2003. Mel has since gone on to compete at the World Championships and the Olympics with considerable medal success of different colours. 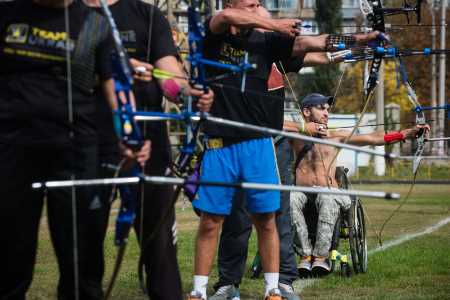 A wheelchair bound archer training for the Invictus games.

Participation in archery is possible with all types of disabilities and impairments and perhaps the most difficult one can imagine, being blind, is also no bar to involvement as there is a thriving organisation called British Blind Sport which promotes archery among many other disciplines.  Visually impaired archers use what is described as a tactile sight to help them take aim in case you are wondering.

Archery has a place for all age groups from the young to the elderly and embraces a whole range of archers in between including those with disabilities as well who compete on a level playing field with their fellow archers – it is one of the most inclusive sports.

More than just the mind

So is target archery really a physical sport?

If it is possible for the young, the old and the less physically able to participate in it, does target archery offer any physical benefit to the participant?

The connection between mind and body welfare has already been discussed but target archery does offer many purely physical benefits including:

​Target archery is a year round sport which promotes the benefits of the great outdoors and the friendship and camaraderie of others before you even lift a bow to take a shot. 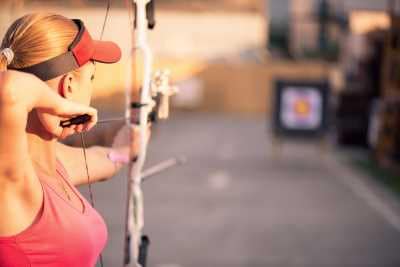 The average 35 year old female can burn 144 calories per hour target shooting and that is not within a hunting environment which clearly offers even more potential for calorie consumption with the hike to and from the target destination across varying and perhaps challenging terrain.  And don’t forget, the weight of your bow and pack and, the energy required for mental focus and concentration either when you take a shot.

Target archery and bow hunting is a sport that is hard to beat in terms of what it can offer the participant – stated mental health benefits, physical exercise and the companionship and friendship of other archers, with plenty of healthy competition to boot.  Inclusive to all types of people and set in the great outdoors, you will be hard pressed to find a sport that can offer as much to the individual, sustaining good mental health being just one among many of the key benefits.

Hi there! I’m Dave, the founder of targetcrazy.com. I’m a passionate bowman and a fan of all target sports in general. I created this site to share my knowledge with you and help you make more informed choices! Please let me know what you think of my work, comment, like, rant, speak up!

If you are interested in doing a guest post for High on Recovery, please email me at smswaby@icloud.com with your article title and summary.